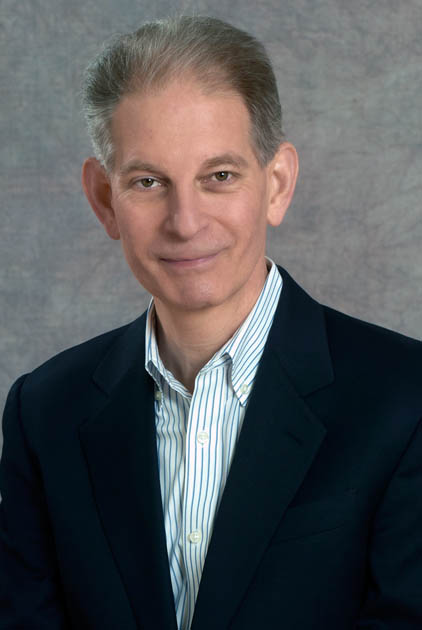 His current research focuses on the mesoaccumbens dopamine neurons that are thought to mediate the rewarding effects of abused drugs, as well as to figure importantly in the pathogenesis of schizophrenia. He has shown that these neurons release glutamate from a subset of their synapses. In transgenic mice with fluorescent dopamine neurons, he is exploring the dynamic interaction between the dopamine and glutamate release. He is using transgenic techniques to reduce or eliminate glutamatergic transmission to address the role of the glutamatergic cotransmission, and more broadly the relative contributions of different glutamatergic pathways to drug-dependent and schizophrenia-related behaviors.

On the postsynaptic side, he is examining the trafficking of dopamine receptors involved in the modulation of single accumbens synapses. He is the recipient of research grants from NIDA, NIMH, and NARSAD.

Dysregulated glutamatergic neurotransmission has been strongly implicated in schizophrenia. Similarly, alterations in glutamatergic neurotransmission as a result of repeated stimulant administration have been strongly implicated in addiction. Recent studies have highlighted the therapeutic promise of modulating glutamatergic transmission in both disorders. We have shown that neurons from glutaminase (GLS1) knockout mice show an activity-dependent presynaptic reduction in glutamatergic synaptic transmission, suggesting that inhibition of glutaminase may have therapeutic potential. While GLS1 knockout mice die shortly after birth, GLS1 haploinsufficient mice with one functional GLS1 allele (GLS1 hets) are remarkably normal. Strikingly, functional imaging reveals that the mice have focal hypometabolism in the hippocampus, mainly involving the CA1 subregion, which is the exact inverse of recent imaging findings in patients with schizophrenia. GLS1 het mice are less responsive to the behavioral and neurochemical effects of stimulants. Thus GLS1 het mice manifest phenotypes consistent with resilience to schizophrenia and addiction. We are now seeking to identify the crucial glutamatergic circuits using a conditional transgenic approach combined with optogenetics to measure functional connectivity in the same circuits. One of the crucial glutamatergic circuits appears to be the midbrain dopamine neurons themselves. These neurons are thought to mediate the rewarding effects of abused drugs, as well as to figure prominently in the pathophysiology of schizophrenia. We have shown in a coordinated series of molecular, physiological and morphological studies that the neurons use glutamate as a co-transmitter. Mice with a conditional knockout of glutamate show an attenuated response to stimulants indicating that dopamine neuron glutamate cotransmission may be important in addictive processes. In quasi-horizontal brain slices that encompass the neurons and their limbic projections, we have shown that when dopamine neurons fire, dopamine neuron glutamate transmission shows facilitation at higher, burst-firing frequencies, as a result of concomitant dopamine release. Counterbalanced pre- and postsynaptic actions determine the frequency dependence of dopamine modulation; at lower firing frequencies dopamine modulation is not apparent, while at burst firing frequency postsynaptic facilitation dominates and dopamine becomes facilitatory. Dopamine neurons thus convey a fast glutamatergic signal that is accentuated at burst firing frequencies by concomitant dopamine release. This unique signal may play an important role in encoding salience during reward learning, and may be an important substrate for enduring physiological and pathological changes in dopamine system function. Taken together, the hope is that by countering psychostimulant-induced neuroplastic changes we may find new ways to treat schizophrenia and addiction.