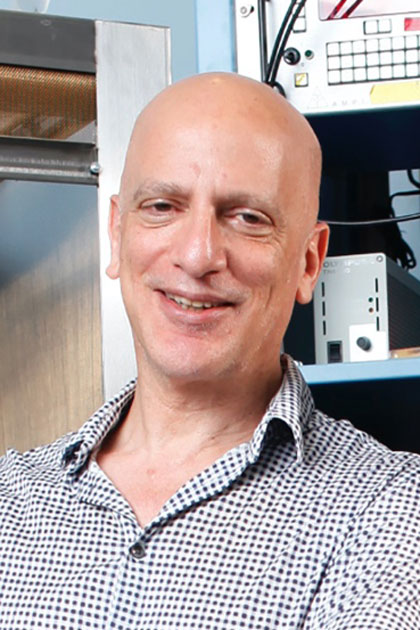 Dave Sulzer is a professor of Psychiatry, Neurology, Pharmacology, and at the School of the Arts at Columbia University and New York State Psychiatric Institute. He attended Michigan State University, studied plant breeding and genetics at the University of Florida, and received a PhD in biology from Columbia University. His lab has published over 200 studies on synaptic function in normal and diseased states that are cited over 40,000 times (h-index 86). He is the founder of the Dopamine Society, the Gordon Conference on Parkinson’s Disease, and the journal Nature Parkinson’s Disease.

He has received awards from the McKnight, Simons, Helmsley, NARSAD, Huntington’s, and Aaron Diamond Foundations and given named lectureships at the National Institutes of Health, Harvard, Yale, UCSF, Emory, UC Irvine, and the Universities of Minnesota, Jerusalem and London and the Portuguese and Austrian Societies for Neuroscience. His students and postdocs have received Fulbright, Marshall, and Regeneron awards for their work in the lab, and past trainees are professors at Columbia, Rutgers, Cornell, Yale, Lund, Pittsburgh, Jefferson, Tufts, Emory, Karolinska, Ecole Normale Superieure, and NYU, while one who runs a pharmaceutical company and one is the science editor at the Wall Street Journal.

Dr. Sulzer's lab investigates the function and alteration of the synapses of the cortex and the basal ganglia including the dopamine system in normal behaviors such as habit formation and action selection, and in diseases of the system. Their work has made fundamental contributions to understanding the roles of these synapses in Parkinson's and Huntington's diseases, schizophrenia, autism, and drug addiction. His laboratory developed new optical, electrophysiological and electrochemical methods including the first direct recordings of quantal neurotransmitter release from synapses, the fundamental unit of neurotransmission, and the first optical methods to observe neurotransmitter release and reuptake. His work increased the understanding of the life cycle of synaptic vesicles, cellular structures that package neurotransmitter release.

Among the discoveries and inventions of the laboratory are 1) discovery of co-release of glutamate from dopamine neurons (with Stephen Rayport) 2) introduction of the weak base mechanism of amphetamine action and the first direct measurement of reverse transport, an important property of amphetamine 3) the first recording of quantal neurotransmitter release from CNS synapses, by using amperometry at dopamine terminals 4) discovery of multiple means to alter quantal size, including the effects of L-DOPA, amphetamine, vesicle transporter expression (with Robert Edwards), rebound hyperacidification, and discovery of fusion pore flickering 5) discovery of the biosynthetic pathway of neuromelanin 6) introduction of & the role of autophagic degradation in synaptic development, which may underlie forms of autism, 7) discovery of how alpha-synuclein and other proteins are degraded by chaperone-mediated autophagy, which may underlie forms of Parkinson’s (with Ana Maria Cuervo) 8) the first optical analysis of corticostriatal transmission, showing the role of activity, dopamine, and acetylcholine in synaptic selection (with Nigel Bamford) 9) co-invention of fluorescent false neurotransmitters, the first optical means to observe neurotransmitter release and reuptake from CNS terminals (with Dalibor Sames) 10) discovered the role of glutamate in controlling axonal outgrowth and branching 11) discovery of antigen presentation by neurons targeted in Parkinson’s disease, which may underlie targeted cell death.

The Sulzer lab has published over 140 papers on this research and has received awards from the McKnight, Helmsely, Picower, Michael J Fox, Simons, HDSA Foundations, NIH, and NARSAD.

Gordon Conference on Cell Biology of the Neuron (June, 1998)

Plenary speaker for International Conference on in vivo Methods (Tenerife, 1996)

University Paris, Descartes and Institute for Neuroscience and Cognition (May, 2016)

University of Michigan (April, 2008) Dept. Neuroscience, the Spring Seminar, which is run by the graduate students

Neuroscience of neurological and psychiatric disorders, G4100, one lecture per year. 2011-present

Mind and Brain Course, course for Psychiatry and Pharmacology Departments, 1 lecture per year on Pleasure, Reward, and Repetitive Behavior and neuroscience of drug dependence, 2003-2006.

Editorial Board, Journal of Parkinson’s Disease (2017-)

Editor for neurotransmission in The Encyclopedia of Analytical Chemistry (Wiley & Sons, 1999)

2020 Plenary Speaker, Keystone Meeting on Neuroimmune Reactions in the CNS

2019 founded the Dopamine Society (with Louis-Eric Trudeau, U. Montreal)

2018 Schaefer Award to lab (for research by Maria Minacci)

2017 Editorial Board, Journal of Parkinson’s Disease

2014 National Institute of Neurological Disorders, Board of Scientific Counselors